- - - - - - - - - -
a warning to the people, the good and the evil
this is war
- - - - - - - - - -
It had been another long and confusing week for Maria Hill; mountains of paperwork, hiding from the curious eyes of her colleagues and escaping mandatory counselling sessions any way she could. She'd missed so many that Fury was on the verge of physically dragging her there. Given that she'd saved his job, however, he was cutting her some slack for now.

All of that, however, wasn't even the confusing part. Maria wasn't prone to nightmares, but ever since the battle of New York she'd been having them almost nightly. The nightmares varied: sometimes Stark wouldn't make it into the portal and the whole of Manhattan would perish, sometimes the metal Leviathans would be the ones destroying all of the city leaving her standing all alone with the dead bodies of the Avengers and civilians strewed around her, while othertimes she'd be getting tortured for hours by Loki. But one thing was always the same - one way or another Phil Coulson would always die in some new way and Loki would walk away, free as a bird.

And now the nightmares were seeping into her daily life, taunting her with illusions of Phil. It had gotten to such a point where Maria was worried that she might have lost it. He was everywhere and the deputy director felt like she was going mad. She'd very quickly learnt that these apparitions were only a trick of her mind and to not pay them much heed, but it was still hard. Especially since now that her dearest friend and the only person Maria would trust her life to was gone, all she felt was an overwhelming loneliness, the kind that she hadn't felt in years. She wanted him back.

The entire situation made her feel like she was perpetually in a nightmare, except in this one she couldn't escape just by waking up.

Shaking her head, Maria sighed and pushed away from her desk to stand. She needed to get away from the office and clear her head. And like for any agent in her situation, there was only one place that would help. The SHIELD bar.

Locking her office and triple-checking that there was no way someone could get in (she really didn't want anyone to chance upon the letter she'd written to Phil saying the things that she should have told him while he was alive), she strode off in the direction of the bar, head held high and a steely look in her eye. She acted as if she was fine, but in actual fact she felt like she was drowning while the rest of her colleagues just looked on in silence.

Maria needed something strong. Something strong to calm and sooth her anxious mind. Swiping her key-card to enter, the brunette wandered over to the bar and sunk down upon a stool, not even aware of the other patrons. "Whiskey, please," she asked of the bartender as he came around to take her drinks order. With a simple nod, he turned around to prepare her request.

When her returned with her drink, it took Maria a good minute to pull herself from the torrent of thoughts in her mind. She managed to utter a thank you, but it was too late - the bartender was already at the other side of the bar, chatting quietly to another agent. Fingers wrapping around the glass, Maria mentally scolded herself. Snap out of it, Hill! You're a SHIELD agent, so act like it. You're fine. She kept repeating the last bit to herself, over and over. After several minutes she could almost begin to believe it. A sigh left her lips and Maria brought her glass to her lips.

- - - - - - - - - -
from the right to the left we will fight to the death
to the edge of the earth, it's a brave new world
- - - - - - - - - -
STATUS``: active
TAGGED``: open<33
OUTFIT``: her usual SHIELD uniform
NOTES``: set a couple of weeks after Phil Coulson's death. and don't worry about matching this length, cos matching lengths is hard.
LYRICS``: this is war by thirty seconds to mars
CREDIT``: this template was made by the amazing TAYLYNOSAURUS REX! of caution 2.0. if you erase this credit & she finds out then she'll either come & steal all your cookies or send you to the realm of eternal tickling: your choice.

Re: Just Another Lost Soul // Loki 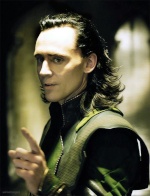